Wilmington Fire Units responded to 912 E. 17th Street shortly after midnight on March 12th, 2022.  On arrival, crews encountered heavy fire and smoke conditions on the first floor of a two story, middle of a row, single family dwelling.  Engine 3 began suppression efforts on the first floor while Squad 4 began searching the residence for occupants.  Ladder 1 assisted with the search and starting to ventilate the building to increase visibility inside the structure.  Engine 2 provided backup hose lines to assist in suppressing the fire while Ladder 2 completed vertical ventilation on the roof of the structure.  A resident was found inside the structure by search teams on the first floor and transported to Christiana hospital, but was pronounced deceased.  Crews operated on scene continuing to extinguish fire that had spread through the walls to the second floor.  No injuries to firefighters were reported and the cause of the fire is currently under investigation by the Wilmington Fire Marshals Office. 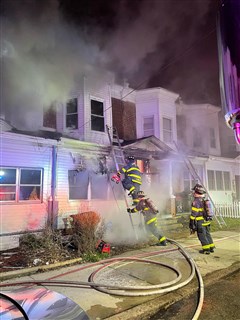